Hue is a wonderful city!

Here are 15 good reasons to come and visit this city:

4. The city of conical hats and ao dai

9. The city of coffee shops and restaurants

10. The city of beliefs and superstitions

13. The inhabitants of Hue, definitively different

15. When it’s raining elsewhere, the sun shines in Hue!

Hue was the imperial capital of the Nguyen Dynasty from 1802 to 1945. Almost all of the historic buildings date from this period.

Apart from the ravages of time, the main destruction occurred during the ambush of Hue in 1885 (attack against the French who reacted violently), the seat of Hue by the Viet Minh in 1946 to 1947 (47 days' occupation) and the events of Tet in 1968. Fortunately, most of the buildings have been restored and recovered their former glory. 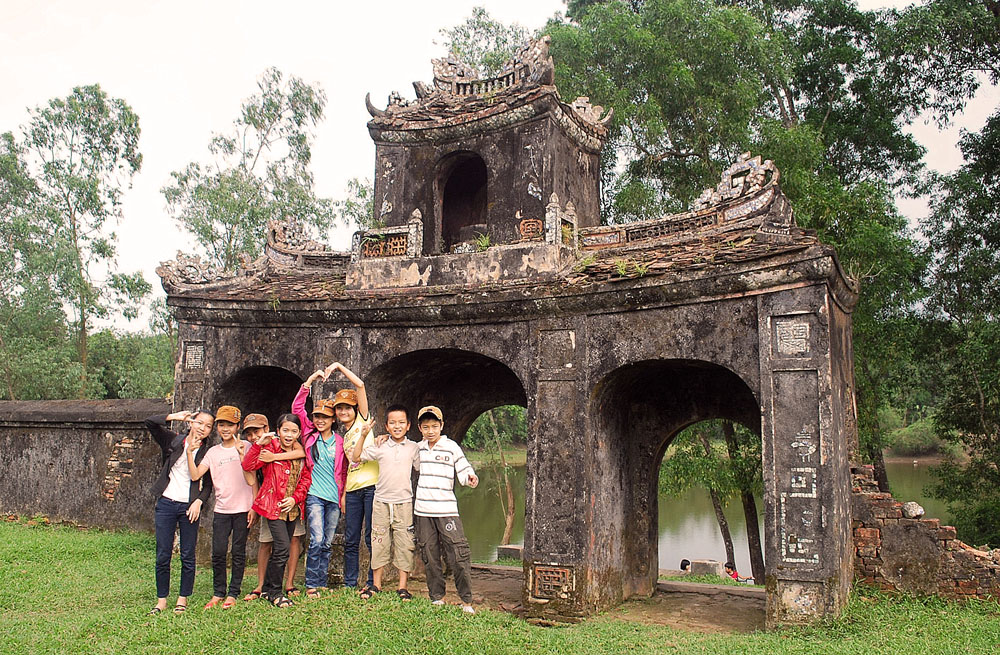 The citadel, the pagoda of the Heavenly Lady, the imperial tombs, the tiled bridge, garden houses, An Dinh Palace, and the arenas are some of the many attractions.

The principal remains are classified as "world heritage" by UNESCO since 1993, as well as the Royal Music of the city.

The Hueens are very proud of their city. Many websites are devoted to the history of the city.
During the French period (1885- 1954), some french inhabitants also developed a passion for the city, through the Association of Friends of Old Hue. A review was published from 1914 until 1945, dedicating several thousand pages to the cities heritage. As a real treasure, these documents are regularly displayed to the public by the association, which still exists.

Hue will delight lovers of architecture!
Local architecture here is much more elegant and lighter than in Hanoi.
Buildings inside the citadel, garden houses (in Kim Long area and the surrounding countryside), temples, communal houses (the Dinh), and royal tombs are examples of the local expertise. 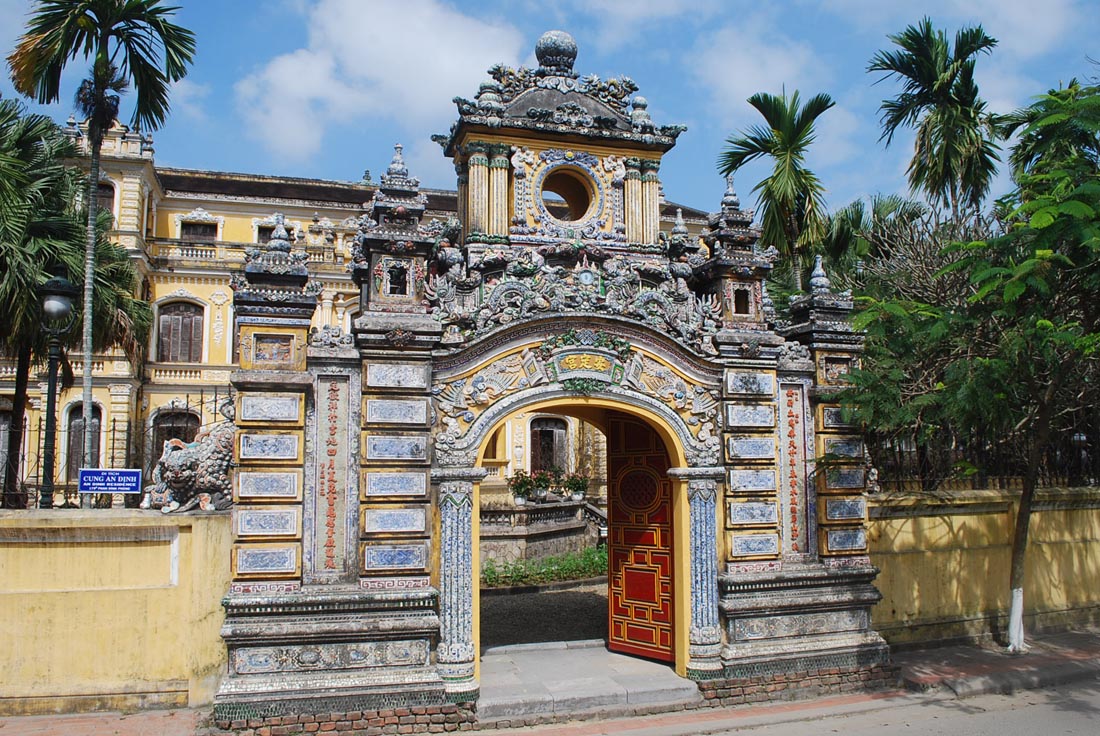 The beautiful An Dinh palace, along the canal An Cuu

The colonial architecture can be seen especially along Le Loi Street, Hue Nguyen, Ham Nghi Streets and in the former Chinatown area of Gia Hoi street.

The An Dinh Palace, along the An Cuu canal and the tomb of Khai Dinh are the symbols of the meeting of Vietnamese and western architectural styles.

The Hue Festival takes place every two years (the next starts on April 29, 2016). During 7 days, the citadel and the city resonate with the sounds of music and dance performances and parades of all kinds. The whole town is in festive mood, with the support and the presence of numerous foreign delegations. Do not miss it!

Boat races can also be seen on the Perfume River  on September 2, a festival of traditional crafts every two years (alternating with the festival), concerts in kiosks at weekends ... 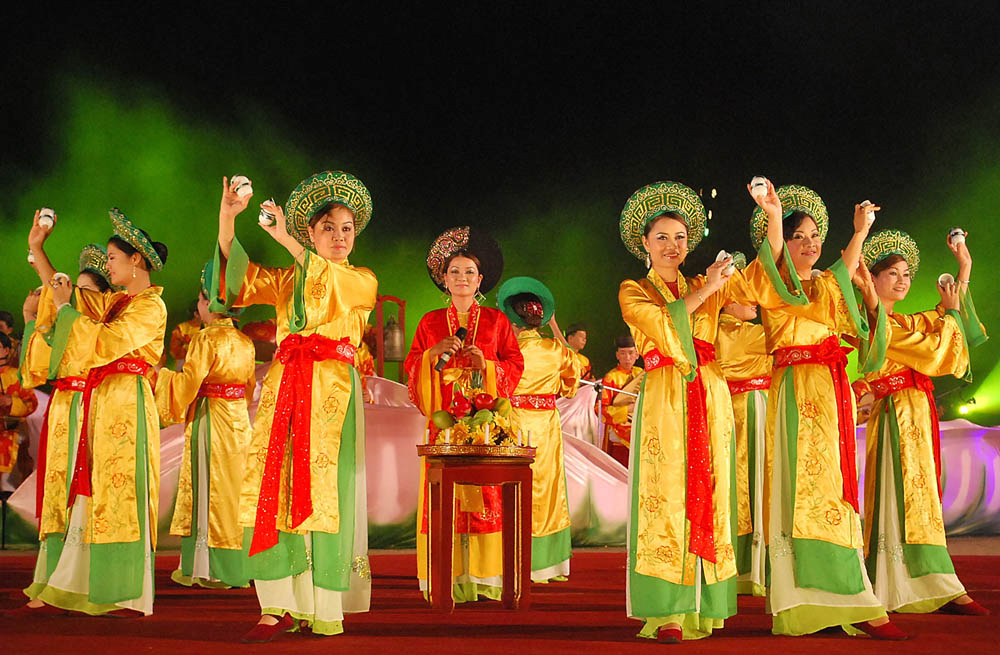 Traditional show during the festival

The shows are also in the street every morning, between 5 to 6 am when people go out to exercise (around the citadel in particular) and have breakfast.

4. The city of conical hats and ao dai

Hue conical hats are renowned throughout Vietnam. Some reveal patterns or poems through.
Twice a week, on Mondays and Fridays, schoolgirls of Quoc Hoc High School (along the Perfume River) dress in ao dai, the Vietnamese long tunic. It’s a lovely show in the enchanting old town.

The first emperors liked to be served 50 different dishes at every meal. This tradition leads to a sophisticated cuisine, finely decorated. It is known as the Royal Cuisine.

The popular dishes can be easily found along the streets, for a cheaper price. Traditional dishes are numerous. Do as the Vietnamese, taste everything!

In the pancake family, we find the "banh khoai" (stuffed with shrimp, pork and bean sprouts)
Other specialties are usually made with glutinous rice, cassava, shrimps. This includes Banh Beo (glutinous rice and shrimp), Nem Lui (pork wrapped around a bamboo stick), Banh Ram It (pork and shrimp). Some other specialties are wrapped in banana leaves, such as Banh Loc (shrimp and pork) 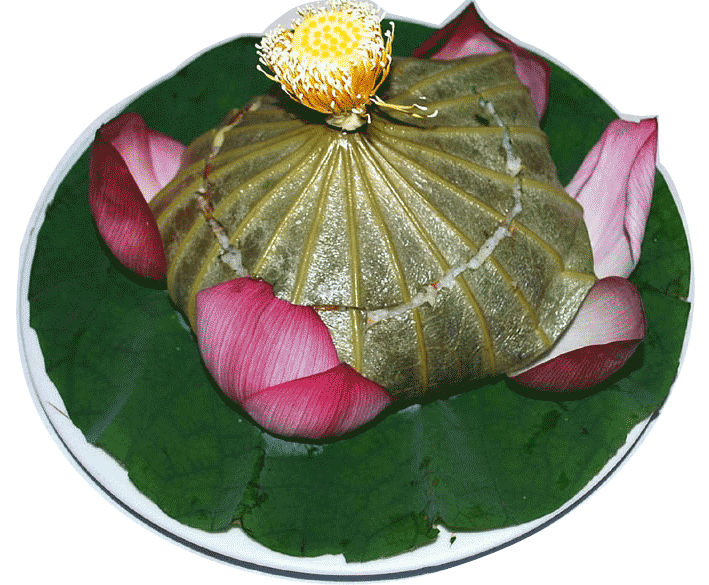 «Royal» dish displayed during the festival

To end the meal, we can savor "che" (sweet desserts) and the famous Me Xung, the local nougat with sesame.
With a high Buddhist concentration, Hue is also rich in vegetarian restaurants. Mushrooms and tofu dishes are famous.

For fruits, central vietnam is not as rich than the Mekong Delta, but the mangosteen of Kim Long district and grapefruits at Thuy Bieu district are famous.

Beaches are just 12 km from the city. Rent a bike or take a motorcycle taxi and join Thuan street by road from the end of Le Loi Street. On the road, do not miss the picturesque village of Duong No. There, you'll see a traditional house in which the family of Ho Chi Minh resided.
If you opt for Vietnamese ambience, you have to get up early (between 5 and 7 am) or go there after 6pm. Follow the flow of bikes to the public beach of Thuan An. 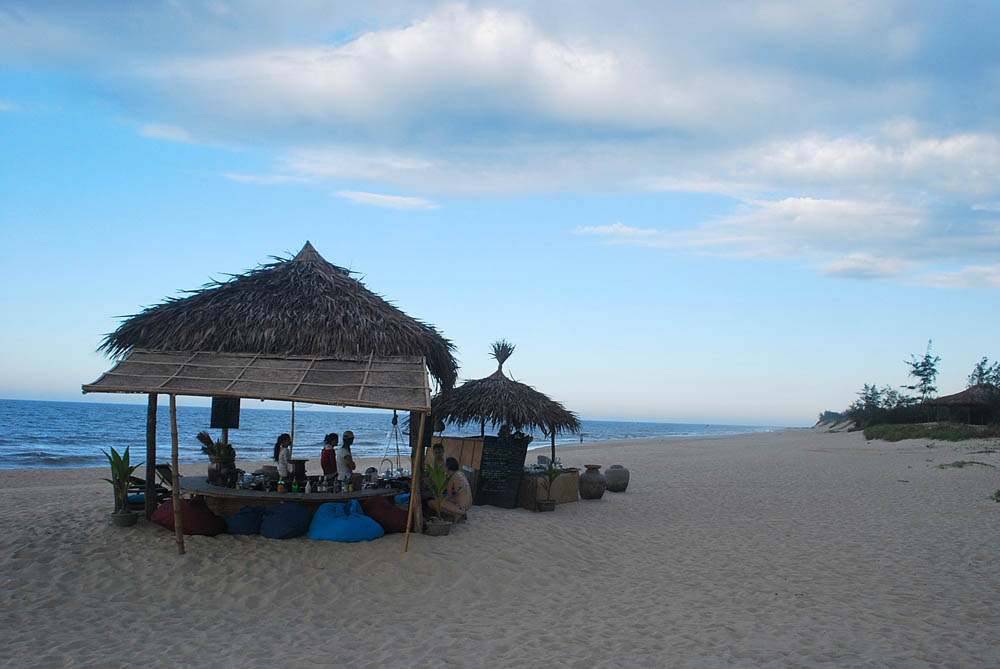 One of the beaches of  Hué

You can also opt for almost deserted beaches, such as "The Beach" (4 km from Thuan An to the south), in a pleasant setting designed by a French Vietnamese couple.
Avoid coming back at night because the road is poorly lit.

For beer lovers, do not miss the beer Huda ("hu" as Hue and "da" as "Danish") and the beer Festival! These beers are produced by Carlsberg in Hue. You can enjoy these beers in many restaurants “where we drink” (nha hang Nhau), especially along the Perfume River in Gia Hoi district (the bridge after the Dong Ba market ). Do not abuse the good things!

Far from the bustle of Saigon and Hanoi, Hue is the city of bicycles. Most students who study here commute by bikes to the delight of eyes and ears!

You will find no difficulties to rent bicycles or motorbikes. It’s the best way for exploring the city, the citadel and the surrounding countryside. For romance, you can also opt for pedicabs, everywhere in the city.

The city is very safe, day and night. Be careful, however, when traveling at night because of somewhat risky driving of the night owls.

9. The city of coffee shops and restaurants

The Hue citizens spend a lot of time in coffee shops. You will find them everywhere, from the simplest to the most modern. The coffee is drank mostly on the rocks or with condensed milk. Prices start at 5000 Dong for a black coffee, much cheaper than Hanoi!

Located near the citadel in a colonial-style house, the restaurant "Les jardins de la carambole" is a superb place for discovering the local cuisine revisited by one of the few French settlers in Hue.

Do not miss the "French bakery", whose purpose is to train apprentices in the technical skills of baking and pastry.

10. The city of beliefs and superstitions

No other city in Vietnam gives equal importance to traditional ceremonies, ancestor worship, offerings to the spirits, Buddhist ceremonies and worship of the Mother Goddess. Ceremonies are numerous and plural, the most visible are those held 2 times per month (15 and 30 of the lunar calendar). On this occasion, the citizens of Hue buy multiple paper votive objects, then burn them to get the favor of the spirits. On the Perfume River, in the darkness, you may see the floating candles for worshiping the souls lying in the water. 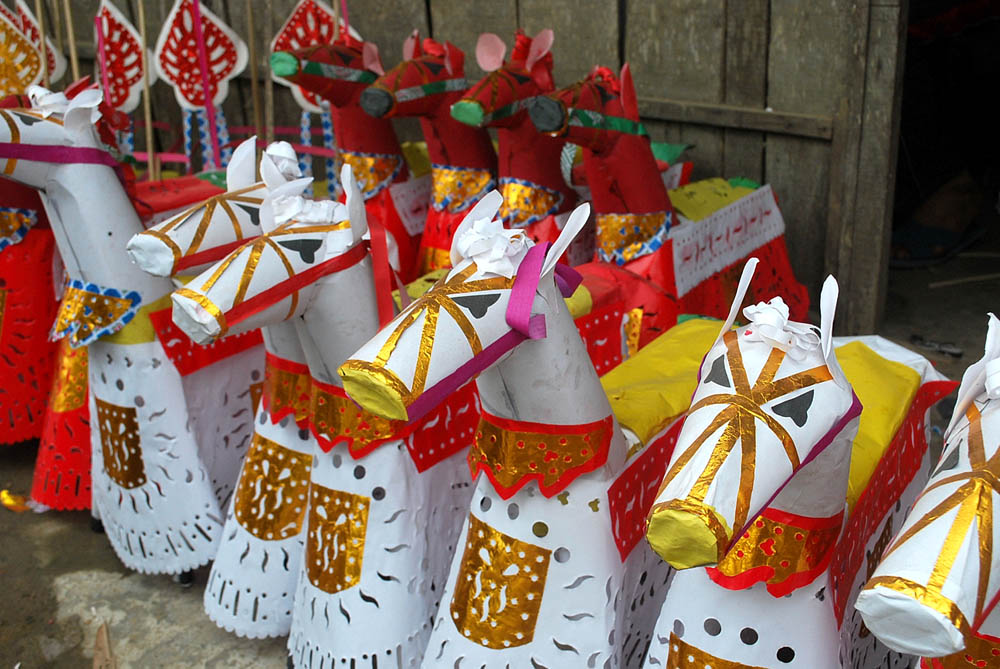 One kind of the usual offerings

The celebration of the birth of Buddha, from 7 to April 15 (lunar calendar) every year gives rise to numerous festivities. Thanks to the Buddhists, experts in acupuncture, massage and traditional medicine can be easily found.

Land of a rich past, the surroundings of Hue contain numerous traditional houses, communal houses, house gardens, temples and pagodas. Located along the river, near rice fields, most of the villages are also rich in majestic trees. Go to the Thanh Toan tiled bridge and continue north along the river walk for a nice trip representative of the rich landscapes around Hue. 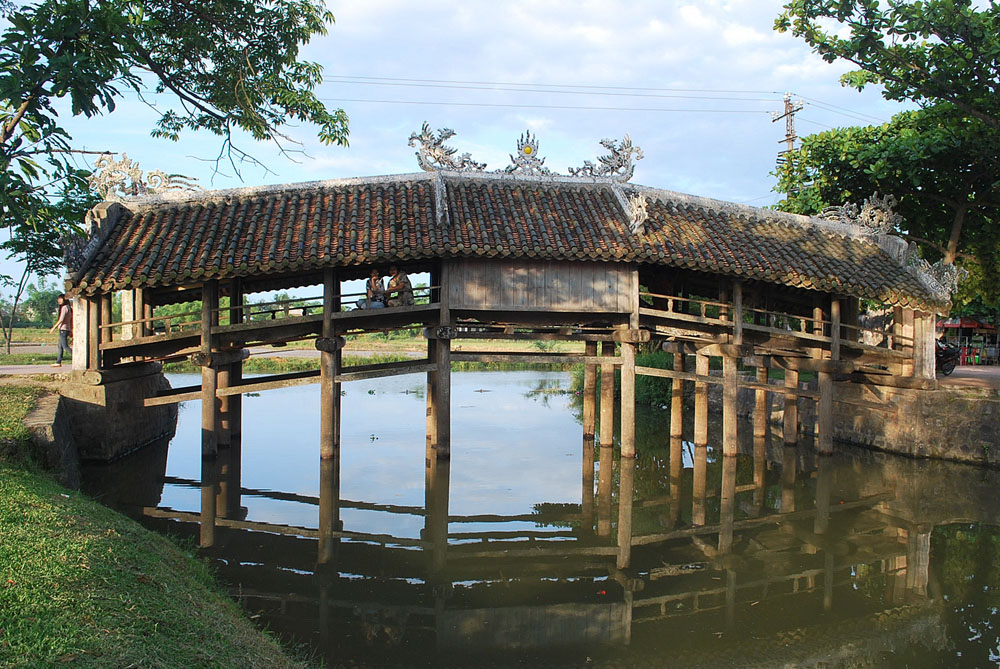 The tiled bridge, located not far from the city center

Do not think that old buildings are frozen witnesses of a bygone era. Many worshiping ceremonies still take place in temples to honor the memory of kings, scholars and other heroes of Vietnam. Similarly, in each traditional house, you will often find a family of mandarin or royal origins. Although most of the family members are living abroad, there is still one for worshipping ancestors.

13. The people of Hue, definitely different

The people of Hue are simple people, mostly coming from the countryside. The tourism industry, government, universities and the Central Hospital are major employers. Salaries are lower here than elsewhere and small scale jobs are numerous.  But the heart of the inhabitants is big!

The Hue dialect is also part of the local heritage. The accent, as well as many words, is different from other areas of the country. Some people of Hue hesitate to go elsewhere in Vietnam for fear of not being understood!

Hue women have always made men dream of them! Dressed in their ao dai and their conical hats, they are beautiful and graceful. Thanks to their traditional education, they are brave and dedicated. All Vietnamese dream of getting married to a woman from Hue!

Men do not enjoy the same reputation. They are rather macho, enjoying the life when sitting down with friends. But there are also big fans of birdsong!

Discover the life of ethnic minorities at only 70 km far from Hue, near A Luoi. You will meet women wearing baskets and smoking with a pipe. All the area along the border with Laos is rich in ethnic villages. Just follow the Ho Chi Minh Trail to discover them. The road to A Luoi from Hue is an all-weather road for anyone by motorcycles.

15. When it’s raining elsewhere, the weather is nice in Hue!

The rainy season starts in late September in Hue, much later than in Saigon and Hanoi. The weather is nice and warm in April. In October and November, rainfall is plentiful with usually two or three short flooding in the city. From December, in addition to the humidity, the weather cools significantly (minimum 15 °) until the end of March.
Flamboyant trees are in full blom from mid April for 3 months.